Separating the Index from the ETF

SEPARATING THE INDEX FROM THE ETF

Like almost everything in these modern times the financial industry is awash with acronyms.  The shortening of titles to just a few capital letters can get very confusing and often results in the reader lumping everything together in the same bucket, especially when such acronyms refer to items in related fields.  This is the normal reaction when discussing indices and ETFs (there we go, just another acronym).

MSCI, S&P, FTSE are acronyms that you may have seen before, but did you know they are the names of the three largest index providers?  The indices that they create are not ETFs but without an index, there would be very little passive investing.  The majority of passive investing involves seeking to replicate the performance of an index.  An index is purely a statistical measure, usually representing a basket of shares.

In the words of S&P Dow Jones Indices, “An index provider is a specialised firm that is dedicated to creating and calculating market indices and licensing its intellectual capital as the basis of passive products.”   The statement encapsulates the whole business model of the index provider.  They create an index, which they then continually update, and sell that data on to financial professionals who need data about real-time market performance.  The index consolidates the information about individual shares into information about the “market”.  A good example of this would be the S&P500 index which is a measure of the 500 largest stocks listed on US stock markets.  Each of those 500 companies’ share prices would move independently of each other but if you wanted to know how the US stock market has performed you would look at the sum of the parts, being the S&P500.

Indexing goes back a long time, well into the late 19th century.  The first indices were created and published by financial newspapers as day-to-day summaries of stock market movements.  An early index provider was the Dow Jones & Co who from 1884 published their Customer’s Afternoon Letter.  From their early beginnings in indexing they would go on to create the Dow Jones Industrial Average (“DJIA”) a few years later, which is still a very popular index.  The DJIA differs from the other large indices in that it doesn’t weight its constituents by market capitalisation (in a market capitalisation index the larger the company, the greater weighting it carries in the index) but rather based on price.  The companies that are included in the DJIA change over time with their inclusion / exclusion being voted by a committee.

A look at the changes in the constituents within the DJIA since 1928 demonstrates how these changes keep the index relevant and up to date with the largest companies in the world with a good example being in 1979 where IBM replaced Chrysler in the index. 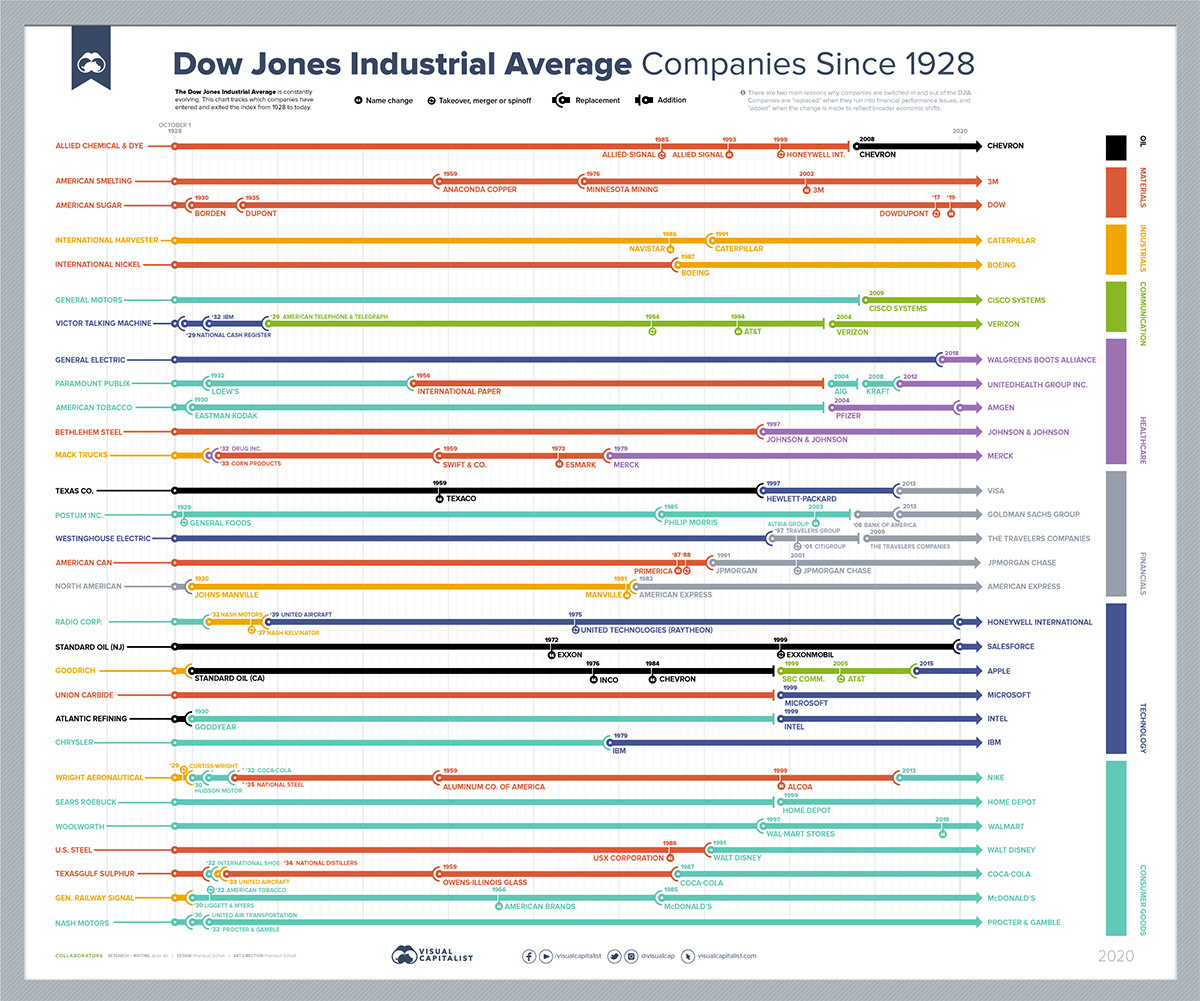 In contrast the constituents of an index with weighting based on market capitalisation would change as the underlying companies grow and shrink.  The earlier mentioned S&P500 has a few tick boxes that need to be checked before the shares of a company are included (and another is excluded) but it is far more objective.  The bigger the company the greater its weighting within the index.  The largest company in the US is Apple and this has the greatest weighting in the S&P500.  The second largest company, Microsoft, has the second largest weighting in the index.

The S&P500 is an index provided by S&P Dow Jones Indices and they make significant revenue by selling this data to funds that track their indices.  There are three large ETFs that seek to replicate the S&P500 with the largest the SPDR S&P 500 ETF Trust (“SPY”) paying S&P Dow Jones 3bps of assets under management and an annual licensing fee of $600 000.  S&P Dow Jones have a very lucrative business providing their data to ETF issuers.

The industry of providing index data is dominated by 3 large global companies with a host of others fighting over small portions of market share.

In order for these providers to stay ahead of the competition they are continually creating new indices for segments of the market.  Recent index trends have been the creation of ESG and Fixed Income ETFs.

We always say that passive investing involves many active decisions.  An important decision for us is to decide what index you are looking to track and then how will you replicate it (ie which ETF to buy).  Each index provider has their own method of calculation in order to determine the exact composition within their indices.  No two indices are exactly the same and even broad based global indices like the MSCI All Countries World Index and the FTSE Global All Cap Index have different weightings to individual shares, despite both of them trying to capture the largest companies around the globe.

Index providers are going to continually “define” the stock market, but you can never buy the index as an investment.  There is however invariably an ETF that seeks to replicate that index.  And ETFs are easy to buy.