The Additional Liquidity Provided by ETFs

One of our non-negotiables when assessing an ETF is liquidity.  This is a cornerstone of our selection process and is mentioned in all our marketing material and our presentations.  In this Insights article we will look at why liquidity matters and then how ETFs provide additional liquidity.

The global investment community has moved to passive investing and ETFs as the default investment solution for a number of reasons.  The most cited reason is lower costs, but we would argue that the additional liquidity of ETFs is just as important.  An ETF is like a mutual fund in that it can hold a diverse basket of instruments however the ETF is far easier to buy, and more importantly, to sell.

Liquidity is one of the most important considerations for an investor.  When investing one of the most critical aspects is to be able to exit and liquidity ensures that there are sufficient buyers within the market for the investor to offload any unwanted positions.  Many investors have wished to exit an investment only to find that the amount of cash they ultimately realise is significantly lower than what they had originally envisioned as fair value.  Invariably lack of demand for the instrument they are trying to sell is to blame.

Spreads are a good demonstration of how liquidity can impact trading.  The spread is the difference between the highest “bid” on the market on a particular instrument and the lowest “ask” on the same instrument.  The bid side represents the buyer’s side of the market, and it is an indication of what price they are prepared to pay for the investment.  The offer side is the opposite selling side of the market and are the prices that the sellers are hoping to receive in exchange for selling the instrument.

We can view the bid side as the demand side of the equation and the ask side as the supply side.  Like any other transaction where demand outweighs supply the seller is in the more powerful position and can afford to raise prices and let the buyers fight over who gets to conclude the trade – a recent example of this would be the US housing market where properties have sold for above their original list price.  There have been so many buyers willing to meet the seller’s valuation that the competition between buyers ends up raising the price that the seller receives.  The opposite also holds true in that where supply outweighs demand it becomes a buyer’s market.  The buyer can pick and choose from several similar options and select the one that is priced best (lowest).  Short-term insurance is a good example of a buyer’s market where there are several providers of similar products, all competing on price.  The buyer gets to choose the one that makes most sense to their pocket and that is why adverts for short term insurance generally focus on cost savings.

In theory the middle of the spread should represent the fair value of the instrument as that would be the median between what buyers feel the instrument is worth and what the sellers would want to receive for selling it.  Where the spread is narrow, the highest bid and lowest ask are close to each other, and it would indicate that there is almost consensus on the value between the buyers and sellers.  If you are seller, you would find a buyer at a price close to the prevailing market rate.

In a recent paper the Nasdaq Economic Research team looked at a number of instruments and assessed what was their average spread against their average daily value traded for 2019.  They looked at listed shares (in blue) and listed ETFs (in red) and plotted the results on a scatterplot.

It makes sense that the more value traded the narrower the spread, as there are more active buyers and sellers.  This is evidenced in the trend in the graph with spreads narrowing as the average daily value traded increases.  An illiquid instrument that doesn’t trade a lot would have a higher spread – the fact that buyers and sellers don’t agree on valuation is one of the reasons that there aren’t many trades a day.  What the graph does however reveal is that the spreads for ETFs (in red) are generally a lot lower than the spreads in the underlying shares.  Apple (“AAPL”), the largest company in the world has a very low spread but that spread is still twice as large as the Invesco QQQ Trust ETF (“QQQ”).  Sellers of QQQ will receive a better price.

The additional liquidity of an ETF

We often refer to the liquidity of ETFs as being like an iceberg – what you can see on the surface is often dwarfed by what you cannot see below the surface.  VettaFI have created a great image to demonstrate this. 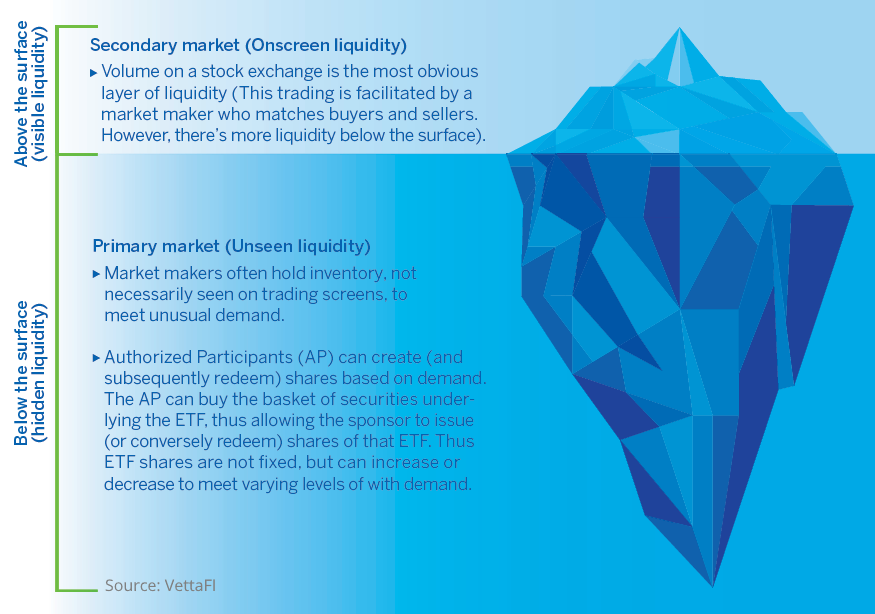 The amount that you can see is the secondary market – this is the onscreen liquidity that one can see on a stockbroking platform where you can see the depth on the buy and sell side.

The primary market though is where the big liquidity is to be had.  Within the primary market the authorised participants have the ability to create or redeem shares of the ETF to meet the demand.  If you have a situation where demand outweighs supply (seller’s market) the authorised participant can take advantage of the pricing arbitrage opportunity and buy all the necessary underlying instruments, package it as an ETF share and then sell that ETF into the market.  Conversely if it is a buyer’s market, the authorised participant can buy the ETF and convert the holding back to the underlying instruments and make an arbitrage profit that way.  The small arbitrage opportunities means that ETFs should always be priced at close to the net asset value of the underlying instruments.  The ability for the issuer to increase or redeem the number of listed shares within the ETF is very responsive to demand and ensures the additional liquidity that we treasure.

To us liquidity allows the investor to enter and exit a position at the best prices, without giving away margin – maximising the return on the trade.  The difference between stock and ETF liquidity is that low volumes in ETFs don’t necessarily mean high spreads, due to the existence of the primary market.